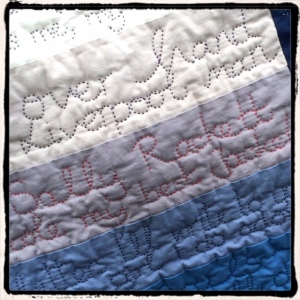 Stitching continues on my Shanty Quilt, and I have been looking at work songs – true sea shanties rather than sea songs – for the sections that relate to getting out to sea. Work songs can be split into broad categories. The structure of the shanty, the length, and the rhythm, are all chosen to fit the type of task they support; there are shanties for hauling, for heaving, for pumping, for working the ship’s capstan, and so on.

For the two “setting off” panels for my quilt I chose Hand Over Hand and Little Sally Rackett.

Hand Over Hand is a (unsurprisingly) “hand over hand” shanty, which is short in duration and sets the rhythm for a task such as hauling rope. The version I know is sung by the Storm Weather Shanty Choir on their 2009 album Way Hey (and away we’ll go).

Hand! Hand! Hand over hand! Get her underway with a Liverpool Man!

The second shanty I use is better known. Sally Rackett is a call-and-response work song. The Shantyman (who leads the singing and sets the pace) sings a line and gets an answer from the crew. The pace and rhythm of the singing support the performance of the task in hand.

There are lots of recordings of Sally Rackett. My favourite is by the Twelve Buccaneers (1967). I also like the version sung by Kimber’s Men on See You When the Sun Goes Down (2010), and the rendition by Hanging Johnny on Shanties and Sea Songs (2009) is suitably rough and ready.

There are variations of Little Sally Rackett but the basic verse is as follows:

In some versions, Sally Rackett has “shipped on board a packet and never did regret it,” while the jacket has been pawned or stolen by Lucy Lockett. There are verses about women such as Nancy Dawson (ran off with the Parson); Suzy Skinner (says she’s a beginner); Dolly Duckett (washes in a bucket); Rosy Riddle (broke my brand new fiddle).

The version by the Twelve Buccaneers includes a verse about a man that I haven’t heard in any other recording:

And in most versions, work is followed by rest:

Learning about the different verse versions enabled me to make a slight variation of my own – I stitched that Sally Rackett had stolen the “best jacket” rather than pawned it. This gave a better narrative flow to my quilt – there is no need for a follow up about losing the pawn shop ticket.

As well as verse variations, there are song variations – the shanty Cheer’ly Man, which can be found on Cheer Up Me Lads (Storm Weather Shanty Choir, 2005), also features Sally Rackett stealing a best jacket. The tune is very different but the theme is the same.

Cheer’ly Man from Sea Songs and Shanties, collected by W B Whall, 1926

These are old songs and some of the sentiments contained are not particularly correct today – especially in their attitudes towards women. However, to me, Little Sally Rackett conjures up very clear images of strong, resourceful women – from just three lines each I feel I know exactly what they look like, how they dress and where they live. The sailors who sing about these women know they may have been taken for a ride but there is no regret, no bitterness. It is just part of life.