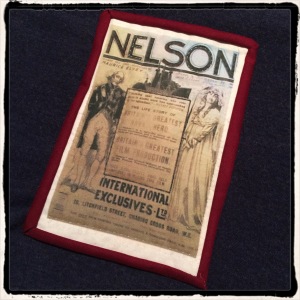 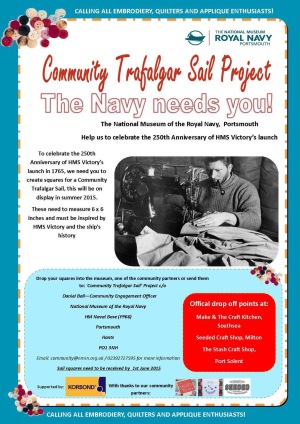 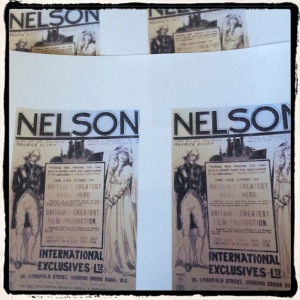 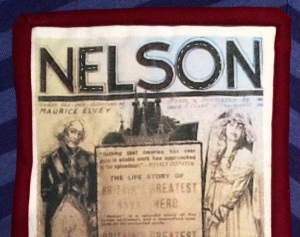 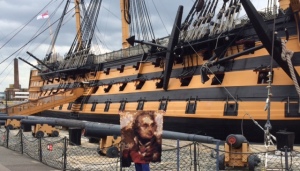 Over the last few weeks, I have been having a slightly frustrating time as a result of working on the Nelson Quilt. All the stitching over papers using the English Paper Piecing technique has strained my arm and I have developed tennis elbow. So no progress is being made on the Nelson Quilt at present, but that does not mean that the associated research project has ceased.

On Friday 1 May I took the Nelson Quilt to Portsmouth Historic Dockyard. I wanted to visit HMS Victory as part of the preparation for a paper I am giving at a conference later this month about how research into Maurice Elvey’s Nelson film led to my making the Nelson Quilt. 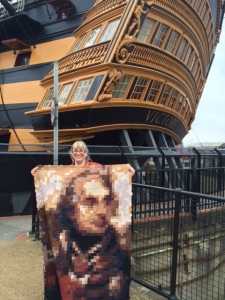 Visiting HMS Victory is fascinating. Nelson’s flagship at the Battle of Trafalgar represents an important piece of Naval history and there are many well-informed guides on board who are keen to share their knowledge of and enthusiasm about the ship, Nelson and Trafalgar. On this visit I learned about the latest theories about the damage to Nelson’s eye (damaged not lost and he did not wear an eye patch); his migraines; and his role in promoting his own image as hero. I found out about cooking on board and the type of food available to the crew; how the crew stashed their possessions during the chaos of battle; and the heirarchy of dress in the Royal Navy in the 1800s. I also learned details of Nelson’s fatal wounding at the Battle of Trafalgar and how, his face covered to try to hide the news of his injury spreading amongst the crew, he was carried down the steep steps from the quarter deck where he fell to the orlop deck where he died. 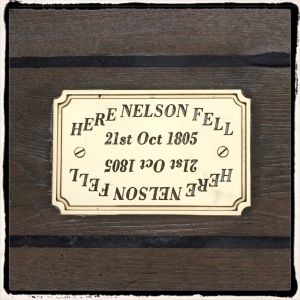 I also had some time to reflect on some more recent events on the ship. In 1918, Maurice Elvey was given special permission by the Admiralty to film scenes on board HMS Victory for his Nelson biopic. In Elvey’s own words, “the Admiralty let me work on the Victory, actually in the cockpit. The most moving thing I’ve ever done was to reproduce the death of Nelson. This was something that frightened me – I’d never do such a thing again.”  I can’t help thinking of Elvey, his camera operator, Mr Frenguelli, and the rest of the film crew struggling up and down the steep steps on board with very heavy camera equipment. And in 1918 the ship was not in dry dock but on the water, so the movement under foot must have added to the challenge. 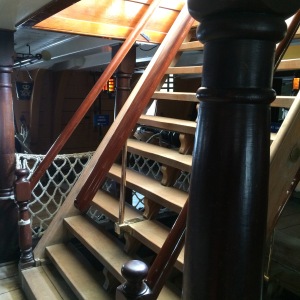 Portsmouth Historic Dockyard is well worth a visit. Not only is HMS Victory there, but it is also the home of the National Museum of the Royal Navy (which has an excellent gallery of Nelsonalia); the Sixteenth Century flagship, the Mary Rose (an astonishing feat of maritime archaeology and preservation); and a whole range of other fascinating things to see and do.

Visitors can also see Nelson depicted as a ship’s figurehead. Originally from HMS Trafalgar, a ship launched in 1841, this towering bust shows Nelson in full dress uniform – and is now a fitting way of greeting those who visit HMS Victory today. 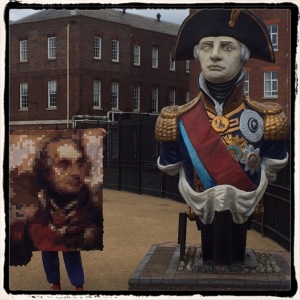